Typhoon-force winds extend 30 miles from center, and tropical storm-force winds 190 miles northeast and 155 miles elsewhere, according to the National Weather Service on Guam. Trami remains forecast to peak at 161-mph sustained winds and 196-mph gusts at mid-afternoon Wednesday, then diminishing slightly as it heads west.

Trami is forecast by the Joint Typhoon Warning Center to keep heading west-northwest, though its ultimate destional continues to remain unclear.

A huge gap remains in model guidance. The GFS forecast ensemble still suggests a curve northeast around Okinawa through the Tsushima Strait near Sasebo Naval Base and Chinhae Naval Base. The CMC ensemble continues to favor a straight run west through Taiwan (or perhaps Luzon) with a few northeast outliers.

A slight chance that some slight effects may be felt on Okinawa, but nothing severe, at least at the moment. Kadena's weather forecast calls for winds picking up Tuesday and the chance of showers and isolated thunderstorms on Wednesday and Thursday. Stay tuned.

Trami has also entered the Philippines Area of Responsibility and has been named Paeng by the national weather authority PAGASA. Tropical Cyclone Warning Signals may be raised for the Batanes and Babuyan island groups later this week.


6 a.m. Sunday, Sept. 23, Japan time: Trami has been upgraded to a Category 1-equivalent typhoon by the Joint Typhoon Warning Center. And as Trami continues to strengthen, a solution on exactly where Trami will go continues to be elusive.

At 3 a.m., Trami was 836 miles southeast of Kadena Air Base, Okinawa, headed west at 17 mph packing 75 mph sustained winds and 92 mph gusts. Tropical storm-force winds extend 190 miles from center to northeast and 65 miles to the southeast, according to the National Weather Service.

JTWC projects Trami to intensify rapidly into a Category 5-equivalent supertyphoon, peaking at 161 mph sustained winds and 196 mph gusts at center at 3 a.m. Wednesday, then diminish a tad as it heads northwest, approaching southern Taiwan.

But where to from there? There remains a 328-mile spread among model solutions, with the GFS ensemble still pointing to a northeast curve and the CMC ensemble favoring a straight run through Taiwan to the Chinese coast before curving northeast.

7:30 p.m. Saturday, Sept. 22, Japan time: Model guidance regarding Tropical Storm Trami remains divided between two main solutions: A possible straight-run west toward the Philippines, Taiwan or China, and a curve northeast toward the Tsushima Strait between Korea and western Japan.

At 6 p.m., Trami was 996 miles southeast of Kadena Air Base, Okinawa, and 475 miles west-northwest of Guam, heading west-northwest at 14 mph, with 58-mph sustained winds and 75-mph gusts. Tropical storm-force winds extend 190 miles from storm’s center. A flash-flood watch and small-craft advisory remains in effect for the Marianas over the weekend, according to the National Weather Service.

Joint Typhoon Warning Center’s forecast track takes Trami west-northwest in the general direction of Taiwan by mid-afternoon Thursday. From there, it’s hard to say definitely where it goes. GFS forecast ensemble favors the curve northeast, while the CMC ensemble favors the straight-run west with a few outliers.

The biggest question marks: Which way will it go, because model guidance is more vastly spread than ever in Trami’s brief life. And it could be Trami might have a brief life as a super typhoon, if at all.

At 3 a.m., Trami was 288 miles northwest of Guam, headed west-northwest at 14 mph, with 52-mph sustained winds and 63-mph gusts. Tropical storm-force winds extend 150 miles northeast of center and 60 to the southwest, according to the National Weather Service on Guam.

The tropical storm watch for Rota, Tinian and Saipan has been canceled, though the flash-flood watch and small-craft advisory remain in effect for the weekend.

Those remain the big questions regarding the projected path and intensity of 28W, which was upgraded to a tropical storm by the Joint Typhoon Warning Center Friday afternoon. It continues lurking northwest of Guam, strengthening gradually as it moves northwest.

Model guidance remains unsettled, but appears to be pointing toward a possible path between Okinawa and Taiwan, with some solutions pointing toward a northeast curve afterward. And intensifying into the fifth super typhoon of the northwest Pacific’s tropical cyclone season.

A tropical storm watch remains in effect for Rota, Tinian and Saipan, along with a flash-flood watch and small-craft advisory for those three plus Guam through the weekend, according to the National Weather Service on Guam.

The question remains, where is 28W’s final destination? Will it make a straight run west into Taiwan or China? Will it curve east or west of Okinawa or over the island? JTWC projects a curve east of Okinawa; the GFS forecast ensembles paint a different picture. Stay tuned.

1 p.m. Friday, Sept. 21, Guam time: As-yet-unnamed 28W remains a tropical depression for the moment. But the long-range Joint Typhoon Warning Center forecast calls for 28W to move within Okinawa’s general direction by the middle of next week.

A tropical storm watch remains in effect for Rota, Tinian and Saipan, along with a flash-flood watch and small-craft advisory through the weekend, according to the National Weather Service on Guam.

If 28W keeps moving as forecast, it should begin curving north at mid-morning Monday, edging within 331 miles of Kadena at mid-morning Wednesday as a super typhoon, 161-mph sustained winds and 195-mph gusts.

But it remains way too early to draw definitive conclusions. Model guidance remains vastly divided, with a spread of 430 miles among track solutions five days out. It remains a guessing game. Stay tuned.

At 7 a.m., as-yet-unnamed 28W was 45 miles north of Guam, heading northwest at 9 mph. A tropical storm watch is in effect for Rota, Tinian and Saipan, according to the National Weather Service on Guam.

28W is forecast to become a tropical storm as early as Friday evening, then move west-northwest, rapidly intensifying as it goes, peaking at 150-mph sustained winds and 184-mph gusts by early Wednesday morning.

The question at this point is where will it go. Model guidance is rather scattered, as are the GFS and CMC forecast ensembles. It’s a guessing game right now. Stay tuned.

7:45 p.m. Thursday, Sept. 20, Guam time: Well, that wasn’t much of a break – three days, to be exact – between Super Typhoon Mangkhut and a new tropical disturbance, on which the Joint Typhoon Warning Center has issued a tropical cyclone formation alert.

A flash-flood watch is in effect for Guam, Tinian, Rota and Saipan, while a small-craft advisory is in effect for waters around Saipan and Tinian, according to the National Weather Service on Guam.

The disturbance, 92W Invest, is 105 miles east-southeast of Andersen Air Force Base, tracking west-northwest at the moment. JTWC projects 92W to keep heading west-northwest in the general direction of the Philippines or Taiwan, and achieve tropical depression-status within the next few days.

Where it’s headed precisely, is anybody’s guess. There’s a vast spread among model guidance; so, too, with the GFS and CMC forecast ensembles. It’s wait-and-see time for now. Stay tuned. 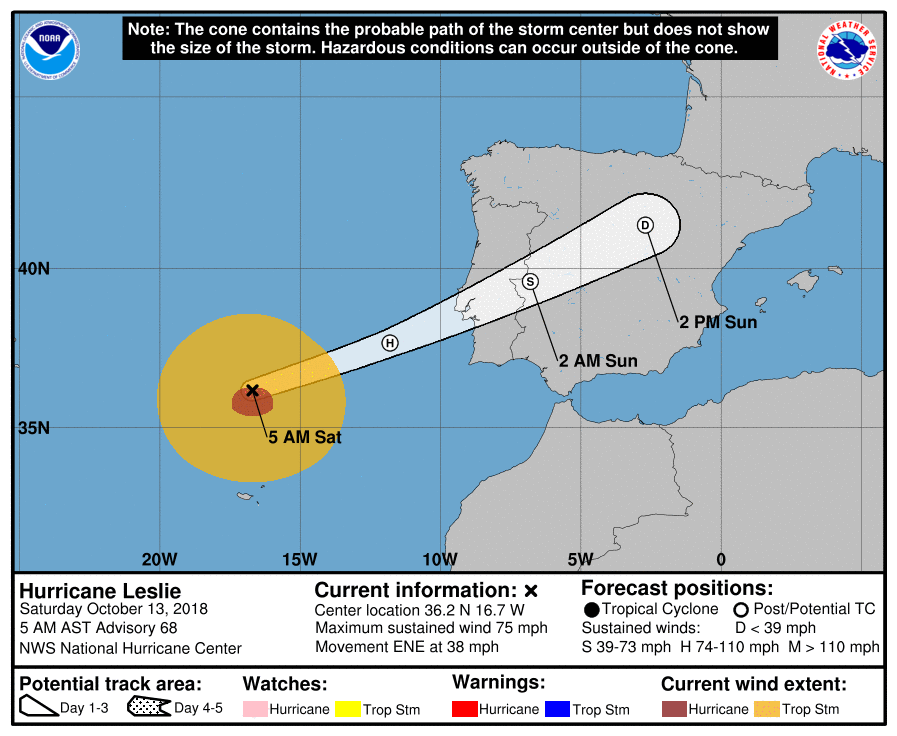