It’s like nothing we’ve seen on any other planet in the entire Universe, and now the mysterious structure on Saturn’s north pole just got even weirder.

In just four years, Saturn’s hexagon has changed its colour from blue to gold. So far, our best guess as to why this change occurred is that this is what it looks like when Saturn's north pole gears up for next year's summer solstice. 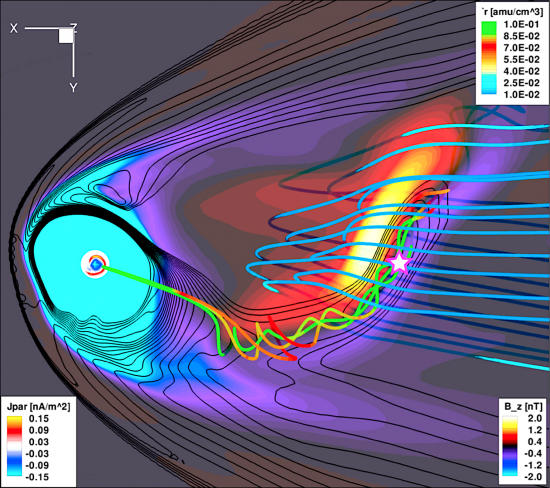 The plasmasphere of Saturn is highly energetic, enough so that lightning up to a million times more powerful than anything on this planet was observed. Saturn emits 2.3 times more energy than it receives from the Sun. 90 megawatts of X-rays were detected by Cassini, but even that was not attributed to its electrical nature. Instead, Saturn’s atmosphere is said to reflect X-rays from the Sun, a “surprising” discovery. It is that magnetosphere that traps and accelerates charged particles from Saturn.

In part, its energetic fields exist because Saturn is quite large compared to Earth; its equatorial diameter is 120,500 kilometers. Since it rotates so fast, 10 hours, 34 minutes, its polar diameter is 108,700 kilometers due to “flattening”: its rotational speed pushes the low-density atmosphere outward at the equator.

According to astrophysicists, the rapid rotation “flings cold, dense plasma outward from the inner magnetosphere by centrifugal force”. As the colder plasma accumulates in the outer magnetosphere, hotter, more tenuous plasma cycles back into the inner magnetosphere. Cassini observed narrow “jets” of hot plasma moving inward, tentatively identified by mission specialists as part of the exchange sequence.


Saturn has been stealing the imaginations of scientists and laymen alike in recent weeks with a host of new discoveries in the planet’s vast satellite system. NASA’s Cassini spacecraft is working overtime as of late, capturing images of potentially life-bearing chemicals found in Enceladus’ enormous water plumes and a recent discovery made on the planet’s largest moon, Titan.

Apparently, the planet’s sand would be amazing for sand castles if enthusiasts were ever to arrive there.

A recent study on the planet’s surface concludes that the sand on Titan is electrified with such strong static that sand particles form an extremely tight bond with one another. Joshua Méndez, a granular dynamicist at the Georgia Institute of Technology in Atlanta, says that the planet’s geology is like Earth only at surface value.

At first glance, if you look at images from NASA’s Cassini spacecraft, Titan looks very Earth-like, with dunes, lakes, oceans, mountains and potentially volcanoes, and it has a dense, nitrogen-rich atmosphere like Earth’. But once you start looking at the details, you realize that it is an alien and exciting world.

These differences come from the sand’s ability to pick up an electric charge through the “triboelectric effect,” the same process in which we pick up static and shock one another. Earth’s sand is able to undergo the same effect, but it does not stick as Titan’s sand does thanks to its strong gravitational pull, which overpowers any cling generated by the static.

On Titan, where the gravity is seven times weaker than Earth’s, the cling is able to hold thanks to it not being so easily overpowered. Méndez also attributes this shaping ability to the sand’s lighter composition, which is fluffier than the silicate minerals that make up the sand on Earth.

Need to rethink how we perceive the surface of other planets
In fact, the cling is so strong that not even the winds can knock it down. Méndez’s study might finally provide an explanation as to why the moon’s prevailing winds don’t flow with the direction of its giant dunes.

Our findings highlight that caution is needed when applying models from Earth to other environments. We have to rethink our assumptions with a world as different as Titan.

hanks to its Nitrogen-rich atmosphere, Titan is often seen as one of the stopping points for human colonization as space exploration expands to the outer reach of our solar system.

CASSINI: THE WONDER OF SATURN

NASA’s Cassini spacecraft has explored the Saturn system since 2004, re-writing our understanding of the giant planet, its rings, moons and magnetosphere. For 13 years the spacecraft’s incredible, truly otherworldly images have revealed the wonder of Saturn in surprising, often awe-inspiring ways. Cassini is planetary exploration at its finest, proving that to truly reveal the grandeur of a world, there is no substitute for actually going there. For more information about the Cassini mission to Saturn, visit https://saturn.jpl.nasa.gov/
Omhoog


In mythology, the Titan Kronos devoured his children, including Poseidon (better known as the planet Neptune), Hades (Pluto) and three daughters.

So when a group of Princeton astronomers discovered twin stars, one of which showed signs of having ingested a dozen or more rocky planets, they named them after Kronos and his lesser-known brother Krios. Their official designations are HD 240430 and HD 240429, and they are both about 350 light years from Earth.

The keys to the discovery were first confirming that the widely separated pair are in fact a binary pair, and secondly observing Kronos' strikingly unusual chemical abundance pattern, explained Semyeong Oh, a graduate student in astrophysical sciences who is lead author on a new paper describing Kronos and Krios. Oh works with David Spergel, the Charles A. Young Professor of Astronomy on the Class of 1897 Foundation and director of the Flatiron Institute's Center for Computational Astrophysics.

Other co-moving star pairs have had different chemistries, Oh explained, but none as dramatic as Kronos and Krios.

Most stars that are as metal-rich as Kronos "have all the other elements enhanced at a similar level," she said, "whereas Kronos has volatile elements suppressed, which makes it really weird in the general context of stellar abundance patterns."

In other words, Kronos had an unusually high level of rock-forming minerals, including magnesium, aluminum, silicon, iron, chromium and yttrium, without an equally high level of volatile compounds—those that are most often found in gas form, like oxygen, carbon, nitrogen and potassium.

Kronos is already outside the galactic norm, said Oh, and in addition, "because it has a stellar companion to compare it to, it makes the case a little stronger."

Kronos and Krios are far enough apart that some astronomers have questioned whether the two were in fact a binary pair. Both are about 4 billion years old, and like our own, slightly older sun, both are yellow G-type stars. They orbit each other infrequently, on the order of every 10,000 years or so. An earlier researcher, Jean-Louis Halbwachs of the Observatoire Astronomique of Strasbourg, had identified them as co-moving—moving together—in his 1986 survey, but Oh independently identified them as co-moving based on two-dimensional astrometric information from the European Space Agency's Gaia mission.

During a group research discussion at the Flatiron Institute, a colleague suggested pooling their data sets. John Brewer, a postdoctoral researcher from Yale University visiting at Columbia University, had been using data from the Keck Observatory on Mauna Kea, Hawaii, to calculate the spectrographic chemistries and radial velocities of stars.

"John suggested that maybe we should cross-match my co-moving catalogue with his chemical-abundance catalogue, because it's interesting to ask whether they have the same compositions," Oh said.

Binary stars should have matching radial velocities, but that information hadn't been available in the Gaia dataset, so seeing their matching velocities in Brewer's data supported the theory that Kronos and Krios, though two light years apart, were a binary set.

Then the researchers noticed the extreme chemical differences between them.

"I'm very easily excitable, so as soon as they had the same radial velocities and different chemistry, my mind already started racing," said Adrian Price-Whelan, a Lyman Spitzer, Jr. Postdoctoral Fellow in Astrophysical Sciences and a co-author on the paper.

Oh took more convincing, both scientists recalled. "Semyeong is careful and was skeptical," said Price-Whelan, so her first step was to double-check all the data. Once simple error had been ruled out, they began entertaining various theories. Maybe Kronos and Krios had accreted their planetary disks at different times during stellar formation. That one can't be tested, said Price-Whelan, but it seems unlikely.

Maybe they only started moving together more recently, after trading partners with another pair of binary stars, a process known as binary exchange. Oh ruled that out with "a simple calculation," she said. "She's very modest," Price-Whelan noted.

Oh's skepticism was finally overcome when she plotted the chemical abundance pattern as a function of condensation temperature—the temperatures at which volatiles condense into solids. Condensation temperatures play a key role in planetary formation because rocky planets tend to form where it's warm—closer to a star—while gas giants form more easily in the colder regions far from their star.

"Other processes that change the abundance of elements generically throughout the galaxy don't give you a trend like that," said Price-Whelan. "They would selectively enhance certain elements, and it would appear random if you plotted it versus condensation temperatures. The fact that there's a trend there hinted towards something related to planet formation rather than galactic chemical evolution."

That was her "Aha!" moment, Oh said. "All of the elements that would make up a rocky planet are exactly the elements that are enhanced on Kronos, and the volatile elements are not enhanced, so that provides a strong argument for a planet engulfment scenario, instead of something else."

Oh and her colleagues calculated that gaining this many rock-forming minerals without many volatiles would require engulfing roughly 15 Earth-mass planets.

Eating a gas giant wouldn't give the same result, Price-Whelan explained. Jupiter, for example, has an inner rocky core that could easily have 15 Earth masses of rocky material, but "if you were to take Jupiter and throw it into a star, Jupiter also has this huge gaseous envelope, so you'd also enhance carbon, nitrogen—the volatiles that Semyeong mentioned," he said. "To flip it around, you have to throw in a bunch of smaller planets."

While no known star has 15 Earth-sized planets in orbit around it, the Kepler space telescope has detected many multi-planet systems, said Jessie Christiansen, an astronomer at the NASA Exoplanet Science Institute at the California Institute of Technology, who was not involved in the research. "I see no problem with there being more than 15 Earth masses of accretable material around a solar-type star." She pointed to Kepler-11, which has more than 22 Earth masses of material in six planets with close orbits, or HD 219134, which has at least 15 Earth masses of material in its inner four planets.

"At the moment, we are still at the stage of piecing together different observations to determine how and when exoplanets form," said Christiansen. "It's difficult to directly observe planet formation around young stars—they are typically shrouded in dust, and the stars themselves are very active, which makes it hard to disentangle any signals from the planets. So we have to infer what we can from the limited information we have. If borne out, this new window onto the masses and compositions of the material in the early stages of planetary systems may provide crucial constraints for planet formation theories."

"One of the common assumptions—well-motivated, but it is an assumption—that's pervasive through galactic astronomy right now is that stars are born with [chemical] abundances, and they then keep those abundances," he said. "This is an indication that, at least in some cases, that is catastrophically false."