TEHRAN (FNA)- Hundreds of civilians poured into the streets in Hasaka city on Friday to protest at the captur of the city residents by the US-backed Syrian Democratic Forces (SDF).
Hundreds of civilians took to Saba'a Baharat square in Central Hasaka, demonstrating against the SDF's capture of the people in the Northeastern city.

Field sources, meantime, said that the protestors declared support for the Syrian Army's campaign on terrorists, calling for the release of the civilians arrested by Security Forces of Asayesh.

The sources went on to say that the SDF's arrest operation is aimed at blackmailing people, adding that Asayesh had called for a sum of $10,000 from family members in the town of Qamishli to let detainees free.

In the meantime, the SDF arrested a number of villagers after unknown raiders attacked their commanders in the village of Mojeiraba in Eastern Hasaka.

Local sources said on Tuesday that the SDF arrested almost two hundred young people in different regions in Raqqa under its forced recruitment plan that has been in practice for the last several months.

The sources further said that the SDF attested over 110 teachers in the town of Ra'as al-Ein and its outskirts, al-Shadadi, al-Ariyeh and al-Houl regions and sent them to their bases.

They added that a large number of teachers have left their job for fear of being recruited forcefully.

Pompeo: 'Enormous mistake' for Iran to blame US, allies for attack on military parade

Secretary of State Mike Pompeo on Sunday blasted Iranian leadership for blaming the U.S. and its allies for an attack on an Iranian military parade that left at least 25 people dead.

"When you have a security incident at home, blaming others is an enormous mistake," Pompeo said on "Fox News Sunday."

Pompeo was asked to respond to comments from Iranian Foreign Minister Mohammad Javad Zarif, who said Gulf countries and their "U.S. masters" recruited and armed the individuals responsible for the attack.

"The loss of innocent life is tragic, and I wish Zarif would focus on keeping his own people secure rather than causing insecurity around the world," Pompeo said Sunday.

ADVERTISEMENT
The secretary of State's interview was taped before Iranian President Hassan Rouhani echoed Zarif, and assailed the U.S. as a "bully toward the rest of the world."

Multiple news outlets reported that at least 25 people, half of whom were members of Iran's Revolutionary Guard, the country's elite fighting force, were killed Saturday in the attack by four gunmen during a military parade in Tehran.

Pompeo said Sunday that President Trump would be open to meeting with Iranian leaders at this week's United Nations General Assembly meeting, but that the U.S. has seen no indication Iran is changing its malign behavior.

Tensions between the two countries have been heightened in the months since the Trump administration withdrew from the Iran nuclear deal, which offered Tehran sanctions relief in exchange for abandoning its nuclear program.

The U.S. has since reimposed some of the sanctions lifted in the deal, potentially crippling the Iranian economy.

Intelligence minister:
Crushing response to be given to terrorists' supporters


Tehran, Sept 23, IRNA - Intelligence Minister Mahmoud Alavi said on Sunday that the intelligence forces are to give a crushing response to those masterminding the recent terrorist attack on a military parade in the city of Ahvaz claiming lives of scores of innocent people.

The country's security forces reserve the rights to give a proper response in due course, underlined the minister.

These puppets killed scores of people to compensate consecutive defeats of their masters in Iraq, Syria and other countries, he said.

Aliens shared hands in the attacks to insecure the Islamic Republic of Iran but to no avail, he said.

Security forces will trace them to bring them to the court of justice while reserving the rights to give them a crushing response, he said.

At least 25 people, including women and children, were killed and more than 60 others injured during September 22 terror attack in Ahvaz which took place during a military parade held to mark the 38th anniversary of an eight-year imposed war against Iran. The self-proclaimed Saudi-affiliated Al-Ahwaz terrorist group claimed responsibility for the attack. 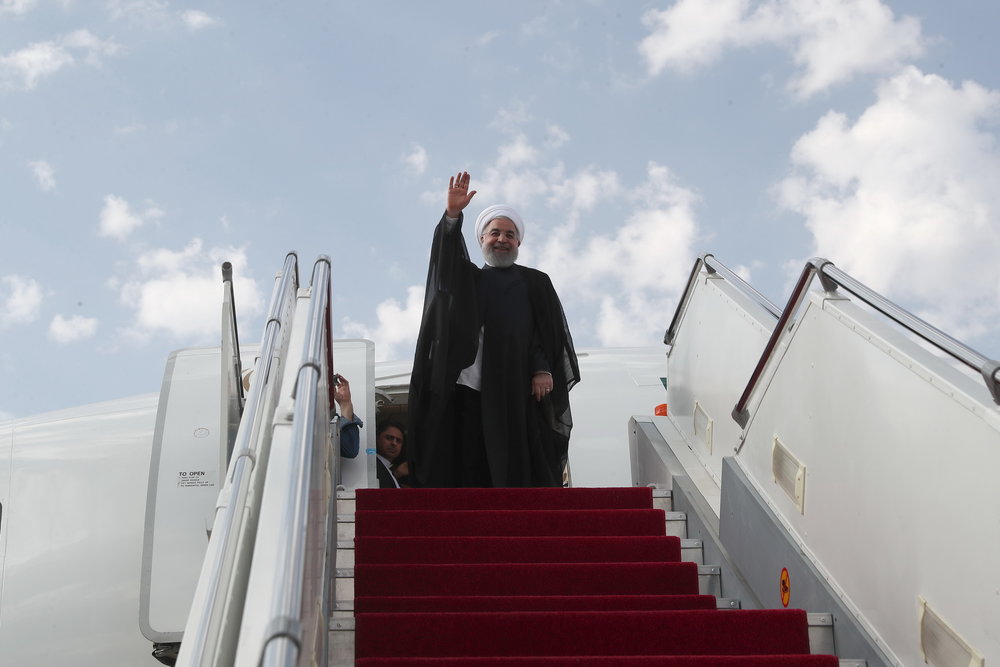 TEHRAN - President Hassan Rouhani said on Sunday that the Iran is ready to confront the U.S. and make Washington regret for exiting the 2015 nuclear agreement and reimposing sanctions on Iran.

“Undoubtedly, the Iranian people will resist and the government is totally ready to confront. With the grace of God, we will pass the difficulties we have been facing over the past months and will make the U.S. regret, because they [the U.S.] have chosen a wrong path,” he said before departure to New York to attend the annual UN General Assembly meeting.

He said that the current U.S. administration has adopted a unilateral and extreme nationalistic ideologies, and in such a situation Iran has many things to say at the UN General Assembly.

“They respect no agreement. They respect neither the (UN) Human Rights Council nor economic agreements and the Paris (climate) agreement… this administration has ideologies of unilateralism and extreme nationalism. In this situation, I think many countries especially Iran have many things to say,” he said.

He added that the UNGA is an opportunity for Iran to express its stance.

“The international situation is not good. The U.S. is taking bullying actions more than ever. It [the U.S.] continues adopting unilateral policies and imagines it can take actions based on force. When a country hosts an organization, it should not think that it has full authority over that organization. The U.S. authority over the United Nations should be to the same extent as of other countries,” Rouhani stated.

He noted that during his visit to New York, he will talk about the U.S. "crime" of violating the international agreements.

President says U.S. will never achieve its plots in Iran

Elsewhere, Rouhani said that the U.S. seeks to cause chaos in Iran, however, he said Washington will never reach its objectives.

Rouhani also said that Iran will respond to terrorist attack in Ahvaz, the capital of Khuzestan province, which left 25 people, including women and children, dead.

“It is obvious for us that they [the terrorists] are affiliated to what group. Those who make claims about the human rights should stand accountable. The U.S. supports mercenary countries in the region and provides them with help, however, these actions do not affect our people’s determination. We will respond to these crimes and all the perpetrators will be punished,” the president pointed out.

Rouhani also blamed the U.S.-backed “mercenary” countries in the region for the deadly terror attack in Ahvaz.

“It is the U.S. who provokes them and helps them to commit crimes. All of these have no effect on our people’s determination. Our people have stood against bigger crimes,” he pointed out.

He expressed hope that all the perpetrators behind the Ahvaz terrorist attack will be arrested and punished.

The Islamic Revolution Guard Corps (IRGC) also issued a statement on Sunday saying those behind the terror attack will soon face “deadly and unforgettable revenge”.

“Considering (the Guards’) full knowledge about the centers of deployment of the criminal terrorists’ leaders..., they will face a deadly and unforgettable vengeance in the near future,” the statement said.

The owner of the Japanese tanker attacked on Thursday said US reports have provided “false” information about what happened in the Gulf of Oman.

The ship operator said “flying objects” that may have been bullets were the cause of damage to the vessel, rather than mines used by Iranian forces, as the US has suggested.

Yutaka Katada, chief executive of the Japanese company operating the ship called Kokuka Courageous, one of two vessels attacked near the Strait of Hormuz on Thursday, said the damage could not have been caused by mines or torpedos that are shot underwater, since the damage was reportedly above the ship’s waterline.