H1N1 IN THE UK - SICKENING PRO-VACCINE PROPAGANDA AIMED AT OUR CHILDREN! DONT TAKE

A rooster that has been genetically modified to prevent the spread of bird flu. Source: Norrie Russell/The Roslin Institute via Bloomberg

Scientists from Cambridge University bred chickens genetically modified to prevent bird flu transmission in a move that may help thwart pandemics in humans.

While the tweaked birds did die from the flu, they infected fewer others around them, scientists led by Laurence Tiley at the university’s veterinary department wrote in the journal Science. The researchers are working on ways to make chickens fully resistant to flu, Tiley said in a telephone interview.

Genetically altered chickens may help protect the poultry industry and shield humans from lethal pandemics, the authors said. Chickens can spread flu to other birds and to their breeders, kicking off a deadly, infectious cycle. Genetic modification may be better than vaccination because vaccines don’t prevent transmission of the virus, they wrote.

The study is “a significant first step along the path to developing chickens that are completely resistant to avian flu,” Tiley, a senior lecturer in molecular virology at the university, said in a statement yesterday. “Preventing virus transmission in chickens should reduce the economic impact of the disease and reduce the risk posed to people exposed to the infected birds.”

At least 306 people have died and more than 500 others have been sickened by the H5N1 strain of avian influenza since it began jumping from birds to people in 2003, according to the World Health Organization.

While the number of H5N1 deaths has declined in the past four years, the virus still circulates among poultry. South Korea raised its bird flu warning to the second-highest level on Jan. 11. It also culled 1.4 million birds to prevent the spread of H5N1, the nation’s agriculture ministry said yesterday.

The scientists bred the chickens by introducing a gene that produces a decoy molecule similar to one the virus needs to replicate, fooling it into going down the wrong biological path. They then crossed a genetically modified cockerel with unmodified hens, breeding chicks carrying the new gene.

The researchers infected 10 modified and 10 regular chickens with H5N1 and then put them in separate pens with 10 healthy birds. Among those housed with the modified birds, 2 died within 11 days, compared with 7 of those placed with the unmodified birds. All the directly infected birds died within 4 days, regardless of whether they had the genetic modification.

The new gene had no apparent ill-effects on the chickens, and is “unlikely to present a risk to consumers, birds or the wider environment,” the authors wrote. The same approach could potentially be used in pigs, geese, quail and turkeys, they said.

“It’s unlikely it’s ever going to be an effective solution, and probably detracts funding away from looking at real solutions, which is really an overhaul of agriculture and farming,” Janet Cotter, a senior scientist at the Greenpeace International Science Unit, said by telephone yesterday.

Disease resistance is one aspect of genetic modification that holds “huge potential” for livestock production, Tiley said in a Science podcast. “By showing what can be achieved, and hopefully sparking some constructive debate, perhaps people will become a little bit more enthusiastic for it,” he said.

The research was funded by the U.K. government’s Biotechnology and Biological Sciences Research Council.

To contact the reporter on this story: Simeon Bennett in Singapore at sbennett9@bloomberg.net

To contact the editor responsible for this story: Jason Gale at j.gale@bloomberg.net.
Omhoog

Ook een filmpje...:
http://playrapport.se/video/2319176
“In individuals, insanity is rare; but in groups, parties, nations and epochs, it is the rule.” ~ Friedrich Nietzsche ~
Omhoog

Child flu vaccine warning for GPs after mistakes made

There are about 10 flu vaccine brands in use


GPs are being urged to take care with the seasonal flu jab amid reports some youngsters have received the wrong one.

The UK's Medical Defence Union said it knew of a handful of recent cases in which children were given flu vaccines unsuitable for their age group.

Some of the jabs in the seasonal flu vaccine programme are not licensed for children under four.

Already "excellent" programme delivery would be improved by reducing errors, the Department of Health (DoH) said.

A spokeswoman for the department said: "It is the responsibility of the doctor or nurse giving the vaccine to check and ensure it is the right vaccine for the patient."

Last year the DoH published a warning against using some flu vaccines after reports that some youngsters had suffered febrile convulsions following the jab.

Officials said it was important that youngsters aged over six months in at-risk groups - such as asthma sufferers or those with a compromised immune system - received the vaccine, but care should be taken to use the right one.

It warned against giving the jabs Enzira or CSL Biotherapies generic influenza vaccine, marketed by Pfizer, to children under five.

There are about 10 flu vaccine brands in use.
'Mix-up'

In the last five years the MDU said it had received 108 reports of errors in immunising children using all types of jab, including against meningitis.

In a statement, it said: "The MDU has received a number of calls from members on its advice line recently where there has been a mix-up over the type of vaccine administered to children.

"In addition, a survey of cases reported to the MDU has revealed that 108 immunisation errors were reported over the last five years.

"Of these, 98 (90%) involved children and three concerned doctors administering the incorrect seasonal influenza vaccine to children."

MDU medico-legal adviser Dr Jacqui Phillips said that although the number of adverse incidents is low considering the numbers of immunisations given, "vaccine errors do represent a sizeable proportion of the medication incidents notified to the MDU".

"Not all seasonal flu vaccines are suitable for children and GPs need to ensure that neither they nor practice staff administer the incorrect ones," she said.

The MDU recommends doctors and practice nurses thoroughly check records prior to administering a vaccine.
Omhoog 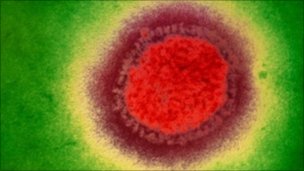 Governments should launch a vaccination programme now to guard against a possible H2N2 flu pandemic, according to an article in the journal Nature.
http://www.nature.com/nature/index.html

The US authors say immunity to the H2N2 flu strain is very low in people under the age of 50.

They say that vaccinating now could save billions of dollars if a pandemic does develop.

Dr Gary Nabel and colleagues from the Vaccine Research Centre in the US say H2N2 has the ability to cause a pandemic in the same way that H1N1 did in 2009.

Between 1957 and 1968, the strain is thought to have caused up to 4 million deaths in a global outbreak, during which time a vaccine was developed.

When the pandemic was over the H2N2 vaccination programme was stopped in the late 1960s, although the virus is still present today among birds and swine.

That means older people will have been vaccinated against the virus, but the relatively young will have missed out - what the authors call the vulnerability of youth.

"Our study suggests that people under the age of 50 have little or no immunity, and resistance dramatically increases for those older than 50. This was also the case for the 2009 H1N1."

They argue that the vaccine developed in the 1950s would still work today and that governments should use this to develop a pre-emptive vaccination programme.

"One approach would be to manufacture the vaccine licensed in 1957 and immunise enough of the world's population to provide 'herd immunity' to the rest.

"This could be achieved by a 'one-time' campaign to immunise most of the adult population worldwide - for example, as part of standard seasonal flu vaccinations - accompanied by an ongoing programme to administer the vaccine to children."

The authors say this would be a much cheaper option than stockpiling the vaccine or waiting for a pandemic to strike before boosting production.

"Another major influenza pandemic is likely to cost far more and create a much greater health burden than a well-planned pre-emptive programme.

"The US Centres for Disease Control and Prevention estimates that a pandemic outbreak costs the United States between $71 billion and $167 billion."

Dr Wendy Barclay, Chair in Influenza Virology at Imperial College, says the H2 flu virus does pose a credible pandemic threat, as do other strains of bird flu.

But she believes there are some big questions about whether a pre-emptive vaccination programme would be welcomed by the public.

"Now we are in the calm after the storm of that swine flu pandemic, it is timely to open up the debate about pre-pandemic vaccines. As Dr Nabel himself points out in his article, we have to ask whether the public will want or accept a vaccine against a disease that does not at the moment exist.

"Work towards making such vaccines available is ongoing in many laboratories around the world.

"Scientifically we are in a position to be able to offer a good solution, the issues to be decided are of cost and of public attitude."

* There are three types of seasonal influenza - A, B and C
* Influenza A viruses are further divided into various subtypes, including H1N1, H1N2, H3N2 and H2N2
* H1N1 appeared in 2009 and spread around the world, becoming a pandemic
* Source: World Health Organization
Omhoog