dodeca schreef:Trauma creates altered gene expression, that is altered epigenetics, which can be passed on to the offspring. And it is these epigenetic changes we now have that is the big effect, not some effect of repression of our ancestors traumatic experiences. Of course recovering those very ancient experiences, somehow ? ?, may well lead to reversing or altering the epigenetic changes.

And one wonders just how the survivors described to their offspring the starry effects they saw. It would surely have been in terms of gods. Perhaps some of the gruesome things would have been left out. And so there would be stories of happy times destroyed by angry rampaging gods. The offspring would have recognized the planets as the gods, but as things calmed down the stories would have persisted but the connection to the planets would have slowly subsided because of the disconnect between the little dots of light in the sky and the description of the planets in the stories. The gods became something else. 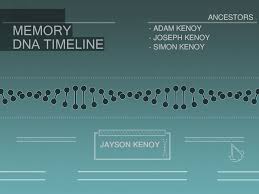 "Our DNA functions as an archive. It contains not only genetic instructions passed down from previous generations, but memories as well. The memories of our ancestors." ―Warren Vidic.[src]AC1 Animus 1.28The Animus, a machine used to decode genetic memory
Kainzorus Prime

Genetic memory was, theoretically, the memories of one's ancestors that were passed down into subsequent generations through DNA. It enabled instinctive skills in animals, and acted as an archive of history in humans.
De volgende gebruiker(s) zeggen bedankt: baphomet
Omhoog Hey 'Dolle'! Thanks for sending me that link. (http://riaanbooysen.com/enigmas?start=3).

That the drawings on the Nazca Plain and elsewhere represent images in the sky there is no doubt. For a correct interpretation it has to be realized that the ancient sky (especially pre 10,000 BC) looked nothing like it does today.

Furthermore it has to be conceded that there was an ADVANCED race of people who had technology that we don't have. And that they had the ability to fly must also be realized as is shown at Abydos and the "Columbian Jets" for example.

I would date the Nazca lines as well as most megalithic monuments between 17, 000 and 10,000 BC as that period seems to be the height of the Atlantean civilization - there are many projects that were suddenly terminated or left unfinished due to the 10,000 cataclysm.

Also at that time Earth was resonating in the ionosphere of Saturn which means stars were not visible but planets and moons loomed large in the sky and the plasmatic interactions between them created a huge "phantasmagoria" which mesmerized the ancients. I would say that the drawings of Nazca represented different celestial bodies that were arranged in a certain way at a certain time period. And that they were meant to be seen from the sky - in aircraft - is obvious!

But, my thoughts goes out more to mathematical 'large scale mapping'. We do own still the mathematical remainings (number sequence 6 and 12 > flower of life modell). It seems everything builded in hugh formats and with presize mathematical order. According to the massive remainings (stone buildings, molded granite constructions) must there have been there technics and skills 'out of this world' and or with other nature laws.

We must even also reconsider how the intelligence ' human' (creatures) looked like (giants?). And under which possible difficult circumstances they lived (radiation? / heat? / gasses? / sounds? / frequencies? / nafta rain? ... )

Back to the 'starmap' or 'planetmap'...:
If it is a planetmap (with moons) it will be (almost) impossible to calculate how the celestial sky looked then.
But.... if the NAZCA 'map' shows us an starmap, we should have some possibilties to recalculate (with data animation) the aligment of the celestial bodies during 10.000 years ago. Mind baffling !!!

The builders were not aliens (of course

). When their islands sank the refugees went to other continents and interbred with the indigenous peoples. The pyramids and obelisks were part of a worldwide electrical circuit which had a power surge and maybe a solar flare from Saturn was involved.

That's why for instance at Puma Punku the andesite granite (which is only superseded in hardness by diamonds) is not only torn apart and scattered but PULVERIZED. And in the Great Pyramid at Giza in the Grand Gallery the walls are pushed out and the ceiling beams lifted up and cracked and the granite box which was originally a pink Aswan colored granite has been burnt chocolate brown.

The conditions of our world under the Brown dwarf star Saturn was much more favorable and fauna and flora flourished and there was no need to be carnivorous - as you mentioned. Jno Cook: Proposal for a colossal Venus of Willendorf.

God and the Brain - The Persinger 'God Helmet', The Brain, and visions of God.
from Todd Murphy Plus 2 years ago /

Neurotheology 1 - This talk, called "God and the Brain", is a discussion of the Persinger "God Helmet" (actually the Koren Helmet) and the 8 Coil Shakti. It covers visions of God, Near-Death Experiences, and other themes in neurotheology, the field that integrates neuroscience and spirituality. This is the first of six lectures on Spirituality and the Brain by Todd Murphy, inventor of the 8 Coil Shakti and the Shiva Neural Stimulation system, which duplicates the procedures used in the God Helmet experiments. He has been a member of Laurentian University's Behavioral Neuroscience research group, under the direction of Dr. M. A. Persinger since 1998.

Stephen Hawking: 'There are no black holes'

Notion of an 'event horizon', from which nothing can escape, is incompatible with quantum theory, physicist claims.
Zeeya Merali
24 January 2014
http://www.nature.com/news/stephen-hawk ... es-1.14583


“There is no escape from a black hole in classical theory,” Hawking told Nature. Quantum theory, however, “enables energy and information to escape from a black hole”. A full explanation of the process, the physicist admits, would require a theory that successfully merges gravity with the other fundamental forces of nature. But that is a goal that has eluded physicists for nearly a century. “The correct treatment,” Hawking says, “remains a mystery.”

combi schreef:Stephen Hawking: 'There are no black holes'

Notion of an 'event horizon', from which nothing can escape, is incompatible with quantum theory, physicist claims.
Zeeya Merali
24 January 2014
http://www.nature.com/news/stephen-hawk ... es-1.14583


“There is no escape from a black hole in classical theory,” Hawking told Nature. Quantum theory, however, “enables energy and information to escape from a black hole”. A full explanation of the process, the physicist admits, would require a theory that successfully merges gravity with the other fundamental forces of nature. But that is a goal that has eluded physicists for nearly a century. “The correct treatment,” Hawking says, “remains a mystery.”

it has yet to pass peer review


Israel To Destroy Dome Of Rock Mosque On Temple Mount?