Quick post - you might want to watch some of the Etna webcams as the volcano looks like it might be starting to put on a show. Dr. Boris Behncke has been warning us that the volcano has been showing signs - such as small explosions - that a new eruptive period might be starting, and it looks like tonight might be the time. You can check out the seismicity as well to see the action begin to ramp up.

Glacier flood from Múlakvísl has been confirmed
Posted on July 9, 2011 by Jón Frímann

Following the flood there is an strong smell of sulphur and there might be dangerous gases in it. At current time the flood appears to be growing and according to the news (written at 01:54 UTC) the bridge was still safe. But there was just 1 meter from the river and up to the floor of the bridge.

Some minor earthquakes have been taking place in the past few hours, they do not appear on the automatic earthquake list on Icelandic Met Office web page. Some of them appear on my Hekla webicorder.

Currently the harmonic tremor is dropping. But that might not mean anything in the long run. So far everything suggests that an eruption has not yet started in Katla volcano. But given the current status that might not last long as it is. The best thing that can be done is to wait and see what happens. But no fear scaremongering please!

Added: When I just finished writing this blog post an new earthquake just started to appear on my geophone at Hekla volcano. IT is from Katla volcano for sure. It was in the ML1.5 to ML2.5 size range it seems. It was an long period earthquake as they have been so far. I think it is from the main caldera, not Goðabunga area.

Icelandic News about the glacier flood.

REYKJAVIK, Iceland—Scientists are monitoring Iceland's Katla volcano amid signs that a small eruption may be taking place.

The acting head of the Civil Protection Agency Iris Marelsdottir, says flooding is taking place near the volcano, caused by the melting of its ice cap.

But she says the flooding may have other causes—such as high geothermal heat—so it not yet clear whether there is an eruption.

Katla typically awakens every 80 years or so, and last erupted in 1918.

Iceland, in the remote North Atlantic, is a volcanic hotspot. In April 2010 ash from an eruption of its Eyjafjallajokul volcano grounded flights across Europe for days, disrupting travel for 10 million people.

An eruption by Mount Etna on the Italian island of Sicily left a nearby airport closed and ... locals turning up early for work.

The strong eruption - Etna's fifth since the beginning of the year - was shortlived, but left the airport closed overnight. Bemused Sicilians, meanwhile, were quick to blame the volcano after thousands noticed that their clocks were running 15 minutes fast. The fast forward time keeping has affected a wide spectrum of digital clocks and watches - from computers through to alarm clocks.

It was spotted when large numbers of locals started turning up for work early, and a Facebook page was organised for those involved to compare notes.

Fontanarossa airport was reopened at 7am local time after seven sweeping machines worked through the night to clear the runway of ash. The cause of the island-wide clock confusion remains unknown. 
Iceland's gotten all the press of late, but there are other volcanoes in the world. One of the more famous ones, Italy's Mount Etna, spent Monday night into Tuesday morning sending up cascading fountains of lava and throwing out car-sized molten rocks.

The volcano's southeast crater began to show fractures on the Monday afternoon, says volcanologist Tom Pfeiffer, who leads volcano tours through Volcano Discovery. At just after midnight Tuesday morning it began to mildly erupt and the tour group walked to a viewpoint on the rim of the Valle del Bove. 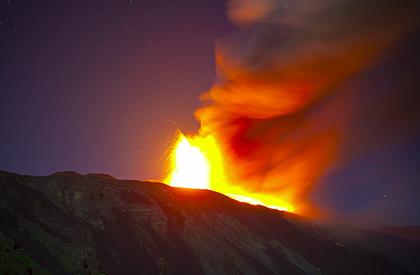 At around 2:30 am the volcano began to send up fountains of lava 1,600 feet into the air, Pfeiffer posted from Italy.

"At the peak of the eruption at around 3 am, the fountains pulsated between an estimated 500-800 m height, with large incandescent bombs visible more than 1 kilometer above the vent and landing behind southeast crater," he wrote. "The fountains gradually decreased by around 4 am and the activity turned into exploding giant lava bubbles, detonating with loud noise, and throwing large bombs up to 1 km in spherical directions above the crater. This activity slowly waned until dawn. While the fountains lasted, the crater wall was completely covered by incandescent lava."

Eighteen Indonesian volcanoes are on “alert” status, two of which are at Alert Level 3, which is called “Siaga”, the Volcanology and Geology Disaster Mitigation Center says.
Center head Surono said Sunday in Jakarta the erupting Mount Lokon in North Sulawesi and Mount Ibu in North Maluku were the two volcanoes at Siaga status.
The center has adopted four levels of alert status: “Normal” (Level 1), “Waspada” (Level 2), “Siaga” (Level 3) and “Awas” (Level 4).
Surono said the conditions at Mt Lokon and Mt Ibu were currently considered most worrisome because they had been consistently erupting searing clouds affecting a radius of 2.5 kilometers.
He added, however, that the eruptions had not yet endangered people living around the volcanoes.
“The eruptions are heading west, while people are concentrated in east,” he said as quoted by tempointeraktif.com.
Surono added that 16 other volcanoes were at Level 2 alert status, “Waspada”, including Mt. Papandayan and Mt. Guntur in West Java.
“Locals have reported several quakes,” he said.
Surono said that President Susilo Bambang Yudhoyono had summoned him on Saturday to report the volcanoes’ status and the center’s preparations to anticipate possible disasters.
He said ideally there should be an expert monitoring the activities of each volcano in Indonesia, as is the case in Japan.
“Currently an expert handles five mountains.”


[video][/video]
illuminati of my own reality
Top